“These delay tactics continue a trend of employers avoiding becoming ACA-compliant, but relief runs out starting next year and permanently ends in late 2017,” says Carol Taylor, Chairwoman of the UBA Client Compliance Solutions Committee and a Benefits Advisor with D & S Agency, a Virginia-based insurance firm and UBA Partner. “Small employers, in particular, need to stay aware of the costs under a compliant plan heading into 2018 and the potential for exceeding the thresholds for the Cadillac Tax.” 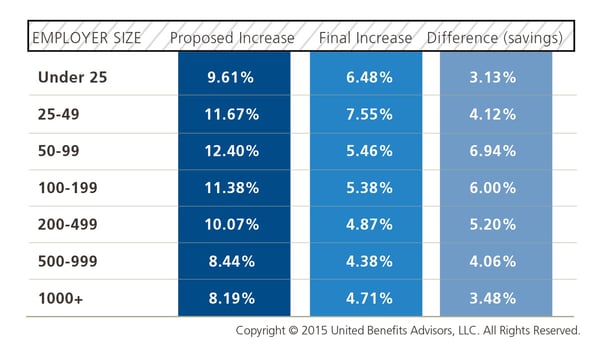 For plans requiring contributions, employees contributed an average of $140 for single coverage and $540 for family coverage, which is only a slight increase from 2014 results - 3.7 percent and 5.5 percent respectively.

“With the continued effects of grandmothered plans suppressing the inevitable step-increase in health care costs, the survey results clearly show that we haven’t seen the full impact of the Affordable Care Act on employers’ and employees’ wallets,” says Les McPhearson, CEO of UBA. “But even with the current protections, the increases we are seeing aren’t trivial, making the savings UBA Partners offer—in some cases up to 7 percent—mission critical. As relief runs out, the continued growth of CDHPs and the associated increase in employee cost responsibility will make consumer-focused transparency and wellness tools more necessary than ever before.”

About the UBA Health Plan Survey

United Benefit Advisors (UBA), one of the nation’s largest employee benefits advisory organizations, released the results of its 2015 UBA Health Plan Survey. The report database contains the validated responses of 18,186 health plans, sponsored by 10,804 employers, who cumulatively employ more than two million employees and more than five million total lives. Individually validated responses from employers in more than 3,000 communities were utilized in compiling the database.

While other surveys primarily target large employers, the focus of the UBA survey is to report results that are applicable to the small and mid-size companies that represent the overwhelming majority of the nation’s employers, while also including a mix of large companies in rough proportion to their actual prevalence nationally.

The survey includes plan renewals from June 2014 to May 2015 through the joint effort of 129 of the nation’s premier independent benefit advisory firms, which comprise UBA. The national distribution of UBA Partner Firms, the diversity of their client base, and the extraordinary number of survey responses provided a unique basis to conduct a non-probability sample survey that yields benchmark results that pertain to a representative cross-section of the nation’s employers.

Contact a UBA Partner Firm for a customized benchmark survey based on industry, region and business size.

United Benefit Advisors is the nation's leading independent employee benefits advisory organization with more than 200 offices throughout the United States, Canada and the United Kingdom. As trusted and knowledgeable advisors, UBA Partners collaborate with more than 2,200 fellow professionals to deliver expertise, thought leadership and best-in-class solutions that positively impact employers and make a real difference in the lives of their employees and families. Employers, advisors and industry-related organizations interested in obtaining powerful results from the shared wisdom of our Partners should visit UBA online at www.UBAbenefits.com.