How Businesses Are Helping Their Employees Stay Politically Active

With Super Tuesday just in the rearview mirror and the 2020 general election looming ahead, we’re in the thick of election season. It can be a difficult time for human resources teams, as they try to navigate politics in the workplace while maintaining an open and supportive office culture. In the past, some businesses have approached this by enacting a simple company-wide “no politics” policy. But recently, HR teams have found more success taking the opposite route: encouraging their employees to stay politically engaged.

Why Invite Politics into the Office? 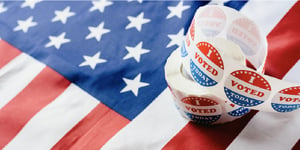 For starters, the modern business often positions itself not just as a company, but as an active member of the community. If a business truly believes itself to be an advocate of the community, that means supporting its employees in exercising their primary civic responsibility: voting. Secondly, research has found that openly nurturing employees’ civic involvement actually helped to reduce contentious political debate, and resulted in a happier, more engaged staff.

A 2018 survey conducted by O.C. Tanner found that 72% of employees at voting-friendly workplaces reported that their job offers the flexibility to balance their work and personal life, compared to 56% of employees at companies that weren’t voter-friendly. Similar discrepancies between these voter-friendly and non-voter-friendly workplaces were found when the same participants were asked how happy they were with their company, and if they would recommend their company as a “good place to work”.

If you’re interested in promoting a more forward-thinking office culture that encourages its employees to be politically active, try implementing these policies.

It might seem like a lofty ideal, but workers getting paid time off on Election Day is becoming increasingly common. In fact, 62% of the participants surveyed in the O.C. Tanner study reported that their employer gave them time off to vote. If it seems like a hard sell to upper management, remember that it doesn’t have to be the entire workday—even just an hour or two on voting days can be enough for employees to do their civic duty.

If paid time off isn’t an option, consider blocking out Election Day on the calendar to prevent any meetings being scheduled. Originally conceived to promote efficiency and productivity in the workplace, “no-meeting” days are already common in the American workplace. By scheduling one on voting days, employees can feel better about taking the time to cast their ballots during the workday.

Finally, if neither of the previous options are feasible for your office or industry, you can still foster a more politically friendly workplace by offering different resources to help your employees vote. Blocking out office time for voter registration, providing mail-in ballots for absentee voting, and providing resources for early voting are all excellent ways to support employees in their responsibilities as citizens.