The Potential of Pay Transparency

In the not-too-distant past, an individual’s salary was a topic to be avoided. Bringing it up in the break room or at a dinner party was a major faux pas, almost taboo. But today, many HR departments are implementing more pay transparency into their policies—some even going as far as posting every employee’s salary. 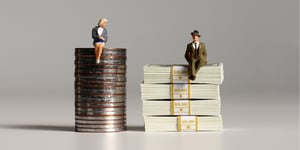 Pay reporting remains one of the more polarizing topics in the HR industry. In fact, the numbers suggest it’s nearly a 50-50 split: LinkedIn’s 2019 Global Trends report found that 51% of companies weren’t openly sharing salary ranges with their employees, while 49% had either implemented pay reporting or planned to in the near future.

Why the stark divide? Some believe that transparency can solve some of the most persistent workplace problems, from negotiation headaches to wage disparities across gender and racial lines. Others fall into the camp that claims transparency actually hamstrings salary negotiation, and can cultivate a more negative, even resentful, office culture.

Pay reporting can seem like a counterintuitive idea, so we’ve investigated the argument for the contested issue, and have compiled our findings here. Read on to learn the potential of pay reporting and transparency, and decide if your office can benefit from it!

The Argument for Pay Reporting

In 2019, PayScale conducted a Best Practices Compensation survey that, among other questions, asked its participants that had left their previous companies the reason for their exit. The top answer was simply “seeking higher pay elsewhere.”

On its own, this isn’t that surprising. But PayScale also found that most employees also didn’t actually know how their pay compared to the rest of the market. What does this mean for employers? That they just lost a capable employee who took a gamble, when they could have retained that person by showing how their salary compared to others in the market. More open and honest communication about pay means employees understand how they’re valued and gives them additional incentive to stay.

The Next Generation of Labor

It’s worth mentioning that millennials, who now make up a considerable amount of the workforce, as well as Gen Z, who will be entering it in the coming years, value transparency in companies—both the ones they work for and the ones they interact with. Brands that target these demographics often opt for more honest and transparent communications, in order to instill trust in the consumer. And just as, in the advent of the Internet age, consumers began to expect all companies to have a digital presence, these same workers may begin to expect transparency from the companies they work for as well.

By far the most popular argument for pay transparency is the closing of both gender and racial wage gaps, a problem that still persists across companies of every size and sector. The social media management company Buffer, that made headlines in 2013 when it publicly posted every employee’s salary on the Internet, completely eliminated the gender pay gap by role. Buffer’s an extreme example, but its philosophy of transparency helped reduce one of the most ingrained issues in the workplace.

It’s important to note that pay transparency alone can’t narrow the wage gap between men and women. Even in Buffer, women still make 9.25% less than men on average. But shedding light on that disparity is the first step to ending the wage gap entirely.