Your Workplace May Want to Get Moving 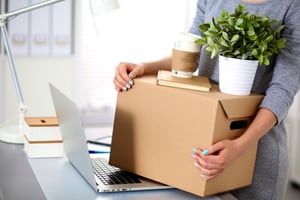 Rearranging workspaces may cause grumbling around the water cooler. The return on employee time and company money invested in reorganizing has long been difficult to prove. But, when Steve Jobs famously centralized bathrooms at Pixar for serendipitous interactions meant to spur innovation, it turns out he really was on to something.

In "Why You Should Rotate Office Seating Assignments," from the Harvard Business Review, space constraints at one large company made for a natural experiment. While the company owners wanted everyone together, the design of the building required a large open area with nine teams and a smaller open area with three. Identical in every way and with no choice of small or large options give to employees, researchers were curious if the team mix made a difference.

There was a difference, and a significant one at that. The larger team area had not only a 25% bump in new deals from new suppliers, but the individual efforts of employees sitting near new colleagues was 40% higher. The employees had shifted from exploiting offers that had worked in the past to exploring new ideas. It wasn't just that the quantity of their work increased, the quality did too.

Why? The researchers dug deeper and found the bumps only happened for employees already considered to be high performing. A base level of expertise and specialization mixed with new people made the skilled workers more creative. Overheard and informal conversations did just what Steve Jobs imagined—created unplanned opportunities for innovation.

What's more, the reorganization had a greater impact on performance than a change in pay structure. And it happened within a month, with continued increases for 80 days post move.

Mixing things up and moving employees in an effort to spark connection and creativity can work. While there will inevitably be a plateau as the newness factor diminishes, and more research is needed, reconfiguration is a next step in office concepts designed to inspire.

Open concept to spark innovation is relatively well known, but changing up employee seating arrangements is a less explored option. Open areas and reorganization can impact productivity and satisfaction, so employers should be clear on the goals of the shuffle. If big ideas and knowledge sharing are the end goals, it might be worth a try.