[INDIANAPOLIS, IN.], March 6, 2013 – Consumer-driven health plans (CDHPs) - high-deductible health plans (HDHPs) often paired with health savings accounts (HSAs) or health reimbursement accounts (HRAs) - are not achieving long-term savings greater than what would be reached by raising the deductible on traditional PPOs, according to the 2012 UBA Health Plan Survey, the largest independent benchmarking survey in the industry. 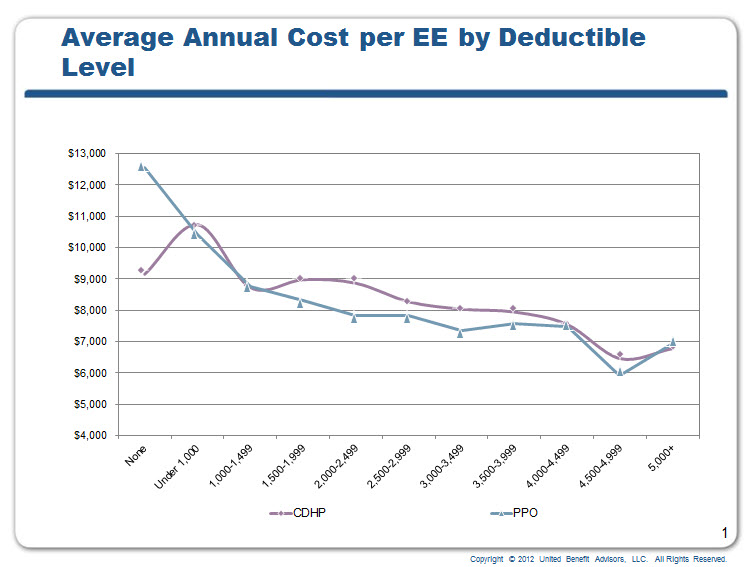 Although nearly 60 percent of the 11,711 employers surveyed said they plan to offer a CDHP in the next five years, despite some regional variances, PPOs remain the dominant plan type with 61.7 percent of U.S. employee enrollment and currently return a lower average cost per employee than CDHPs at nearly every deductible range. Click here to see a chart illustrating this trend.

The key to savings, UBA’s survey finds, is placing an up-front hurdle, a deductible greater than $1,000, on any plan type, in order to positively impact consumer behavior, lower consumption and decrease cost.

Despite the high deductibles in CDHPs, employers have mistakenly removed the employee risk by funding either an HRA or HSA, which does not force lower consumption. Studies show that 80 percent of all employees will not have more than $700 in annual health care costs, so by funding the first $1,000 of an insurance plan, most employees will never see the cost of their health care, and therefore, not make better decisions.

“Employers are turning to CDHPs as a cost-cutting solution against the relentless upward spiral of health care costs,” says Thom Mangan, UBA CEO. “However, our research shows that small-to midsize businesses in particular, who may be considering these plans may first want to consider increasing the deductible on the plans they already have to achieve the same initial savings. Or, prior to implementing a CDHP plan, employers should build a culture of health and wellness in their workplace that drives employee behavior towards quality, low cost medical care and prescription drugs.”

UBA’s survey, which is nearly five times larger than the next largest health plan benchmarking survey, shows that CDHP cost savings appear to be overestimated at the national level as does their popularity, a finding diametric to what is often reported. The UBA study found that savings created by CDHPs over the plans they were replacing or HSA, averaged 1.75 percent in 2012, a significant reduction from prior years. Enrollment also decreased to 15.6 percent (a 1.8 percent decrease from 2011), and nationwide enrollment among employers with 1,000 or more employees dropped substantially from 15.9 percent in 2011 to 11.3 percent in 2012.

While these statistics indicate CDHP enrollment growth is slowing on the national level, there are areas around the country where the percentage of employees enrolled continues to climb or are adopted in a much higher percentage. The plans in the states seeing savings above other plan designs are a result of active plan management where employers communicate wellness programs and provide proper incentives

“Health care reform is likely to spur the growth of high-deductible consumer-directed health plans,” says Mangan. “As medical cost information becomes more transparent, and as patients become better consumers, employers have a chance at cost containment. But how they choose to design their health plans should be based on benchmarking data and workplace culture. With careful plan design, employers could see only 5 percent annual health cost inflation instead of the 10 percent anticipated in the coming years.”

About the 2012 UBA Health Plan Survey

Data in the 2012 UBA Health Plan Survey are based on responses from 11,711 employers sponsoring 17,905 health plans nationwide. Results support employers of all sizes with data by region, industry and employer size.

The survey’s focus is intended to provide a current snapshot of the nation’s employers rather than covered employees. Results are applicable to the small to midsize companies that comprise approximately 98 percent of the nation’s 5 million-plus employers, as well as to larger employers, providing benchmarking data on a more detailed level than any other survey.

To request a free copy of the 2012 UBA Health Plan Survey Executive Summary, visit www.ubabenefits.com, or contact a UBA Partner Firm for a customized benchmark survey based on industry, region and business size. Join UBA CEO Thom Mangan as he walks through the benchmarking data in a recent webinar.

United Benefit Advisors is the nation’s leading independent employee benefits organization with more than 200 offices throughout the U.S., Canada and the U.K. Visit www.UBAbenefits.com.