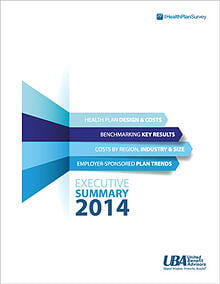 INDIANAPOLIS, IN (December 2, 2014) -- Recent survey data from the 2014 United Benefit Advisors Health Plan Survey, the nation's largest health plan survey, shows that employers continue to shift a greater share of expenses to employees through out-of-pocket cost increases and reductions in family benefits, as well as delay many effects of the Patient Protection and Affordable Care Act (PPACA) by utilizing an early renewal strategy. Today marks the release of UBA’s 2014 Health Plan Survey Executive Summary. Based on responses from 9,950 employers sponsoring 16,967 health plans nationwide, the survey has results applicable not only to the large employer market, but also to the small to midsize market that makes up the majority of U.S. businesses, unlike surveys that focus exclusively on large employers.

Among the most striking trends revealed by the survey, employers have overwhelmingly opted for early renewals of their plans—a delay tactic that helped them manage costs and avoid costly PPACA-compliant plans. Another cost management tactic employers are using is to increase out-of-pocket costs for employees.

“It’s worth noting that the average out-of-pocket costs and deductibles only tell part of the story,” says Les McPhearson, CEO of UBA. “Median figures show a significant increase because expenses at the lower end of the scale are dropping off. In other words, a ‘new normal’ is emerging in terms of higher out-of-pocket costs.”

The survey found that average out-of-network deductibles and out-of-pocket maximums increased more than those of in-network. “Out-of-network expenses are not subject to PPACA, which means they’ll likely continue to skyrocket,” says McPhearson.

About the UBA Health Plan Survey
Data in the 2014 UBA Health Plan Survey is based on responses from 9,950 employers sponsoring 16,967 health plans nationwide. The survey's focus is intended to provide a current snapshot of the nation's employers rather than covered employees. Results are applicable to the small to midsize market that makes up a majority of American businesses, as well as to larger employers, providing benchmarking data on a more detailed level than any other survey. The 2014 UBA Health Plan Survey offers more than just national data and UBA recommends that employers benchmark with local data, which is more effective when adjusting plan design, negotiating rates, and communicating value to employees.

For a customized benchmark survey based on industry, region and business size, visit our website survey page, or contact your local UBA Partner Firm.

About United Benefit Advisors
United Benefit Advisors is the nation's leading independent employee benefits advisory organization with more than 200 offices throughout the United States, Canada and the United Kingdom. As trusted and knowledgeable advisors, UBA Partners collaborate with more than 2,000 fellow professionals to deliver expertise, thought leadership and best-in-class solutions that positively impact employers and make a real difference in the lives of their employees and families. Employers, advisors and industry-related organizations interested in obtaining powerful results from the shared wisdom of our Partners should visit UBA online at www.UBAbenefits.com.

© 2014 United Benefit Advisors. All related trademarks, logos and trade dress are trademarks or registered trademarks in the United States and other countries and may not be used without permission. All other names are property of their respective owners.