Most employers have been using multi-tier prescription drug plans for many years, but new data released from the 2014 UBA Health Plan Survey shows a significant increase in the use of 4-tier plans, which typically cover the highest cost drugs, as well as major increases in corresponding median copays -- a trend that is expected to continue, according to UBA.

“There may be future shifts in these copays since prescription copays and deductibles must track to out-of-pocket maximums under the Patient Protection and Affordable Care Act (ACA),” says Mark Bagnall, CEO of BAGNALL. “However, general competitive pressure will demand that employees contribute more for the highest tiers.”

UBA expects that specialty drug costs will continue to drive the maximum possible copay increases in this tier. “Not only must copays cover the rising costs of these drugs driven by the pharmaceutical industry but they must cover the merging physician commissions given for some specialty drugs,” says Mike Mulqueeney, VP, Johnson & Dugan Insurance Services Corporation.

“We’re already seeing some employers using a 6- or even 7-tier drug plan,” says Carol Taylor, Employee Benefit Advisor, D & S Agency. “When you have an employee taking a drug that costs $30,000 a month, a $100 copay is not sustainable. Eventually, we’ll reach a point where the insurers won’t be able to recoup the cost of prescription drug cost increases. Because of the out-of-pocket maximums in place by the ACA, the only way to offset the increased prescription drug costs will be through higher premium increases.”

According to UBA’s survey, 57.1 percent of all prescription drug plans utilize three tiers (generic, formulary brand, and non-formulary brand), 6.8 percent retain a 2-tier plan, and 32.9 percent offer four tiers or more. In five years (since 2009), the number of 3-tier plans has decreased 20.4 percent (from 71.7 percent to 57.1 percent) and 2-tier plans have decreased 45.6 percent (from 12.5 percent to 6.8 percent) in that same time period. 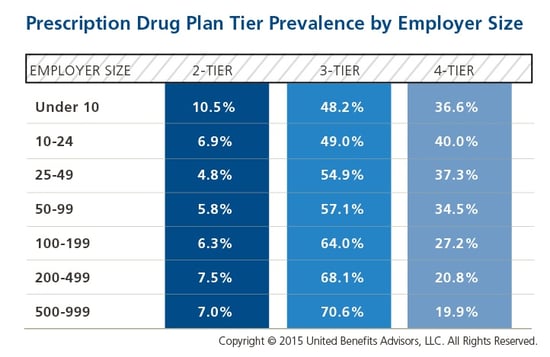 “Employers with 500 to 999 employees haven’t had to go with 4-tier plans yet. These groups are truly experience rated and need to keep a constant eye on their loss ratio. Because prescription costs are increasing at a very rapid pace, and new, much more expensive, drugs are coming to the market they will be forced to look at adding a fourth and maybe even a fifth tier,” says Vicki Ferentz, Vice President, Acadia Benefits, Inc.

Why would the first tier stay level?

“In a 3-tier plan, many times generics are in tier 1, brand name drugs are in tier 2 and ‘other’ (often the highest cost drugs) are in tier 3,” says Pamala McIntire, Benefits Advisor at Reames Employee Benefit Solutions. “Since generics are usually less than $10 -- especially with players like Walmart, Target and Kroger doing $4 promotions -- plans can’t keep raising the tier 1 copay.”

“The perception is that the employee is paying all or most of the generic cost with the tier-1 copay, making it difficult to raise that amount, especially if you are concerned about medication adherence,” says Mark Kmety, Senior Managing Director, Mesirow Financial.

Elizabeth Thomas, Account Strategist from Albers & Company, adds, “That low tier-1 copay not only makes economic sense given the price of the drugs in that tier, but it also aids in driving generic utilization.”

Why the Increase in Tiers 2 and 3?

Kathy Thomas, Account Executive at TrueNorth Companies, who partners with MedOne HealthCare Systems states, “Median tier 2 and 3 copayments in a 3-tier model have increased due to the rapid increases in brand drug costs as set by manufacturers.”

Thomas adds, “Over the last three to five years, many brand medications are at the end of or nearing the end of their patent.” TrueNorth Companies/MedOne agrees, further explaining that during that time, manufacturers will raise their prices, on average, two to three times per year to extract as much profit as possible while their patent lasts before facing generic competition.

“There’s no wiggle room on brand name copays,” says Kmety. “In fact, brand name copays haven’t kept pace with the recent prescription drug cost increases. If you truly look at the cost of these medications, a tier-3 copay should be more in the range of $75 or even $100.” 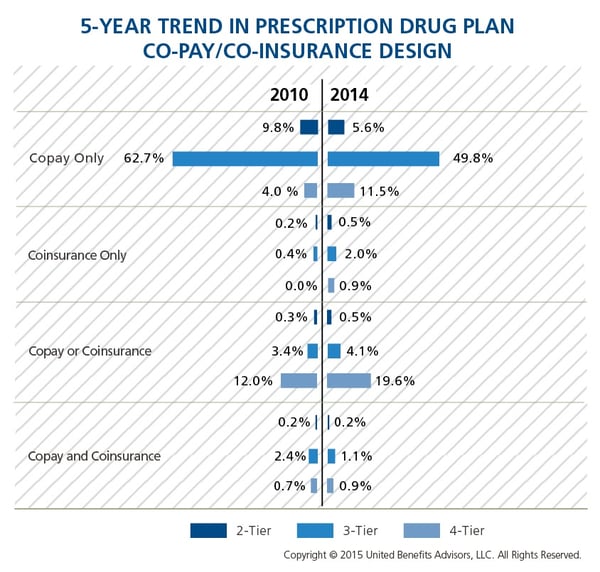 “Catastrophic claimants and ACA restrictions have all forced employers to look for cost-control levers, from adding more tiers to raising premiums and copays, ultimately shifting more cost to employees,” says Les McPhearson, CEO of UBA. “The only way to truly rein in out-of-control costs will be through long-term strategies like wellness programs aimed to change our current culture of over-utilizing prescription drugs.”

About the UBA Health Plan Survey
Data in the 2014 UBA Health Plan Survey is based on responses from 9,950 employers sponsoring 16,967 health plans nationwide. The survey's focus is intended to provide a current snapshot of the nation's employers rather than covered employees. Results are applicable to the small to midsize market that makes up a majority of American businesses, as well as to larger employers, providing benchmarking data on a more detailed level than any other survey. The 2014 UBA Health Plan Survey offers more than just national data and UBA recommends that employers benchmark with local data, which is more effective when adjusting plan design, negotiating rates, and communicating value to employees.

For a customized benchmark survey based on industry, region and business size, contact your local UBA Partner Firm.